What a Magic Ball Has To Do With Framing Goals
Tuesday, 15th February 2022 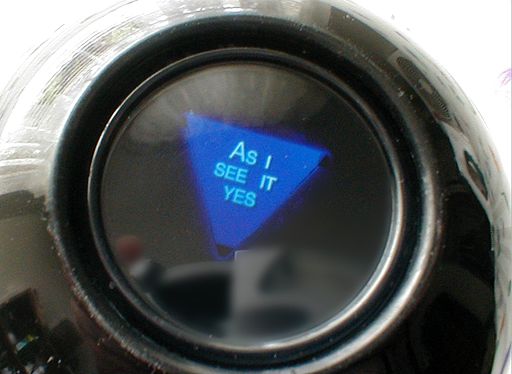 In a past work setting, we had a "Magic 8-Ball" to occasionally resolve ties during meeting debates. While never the final arbiter, it provided some light-hearted opinions from the realm of randomness. For those who don't know, a Magic 8-Ball is a novelty device typically full of a liquid and die, which after shaking, reveals an answer to a "yes or no"-style question.

My initial reaction to learning that there were more "YES" possibilities than "NO" was to conclude that it was an unreliable judge since it was biased in favor of YES. I thought to myself, "No longer can I trust in the wisdom of a random toy for unbiased guidance!" But my concerns were quickly alleviated after considering that the relevance of a YES or NO depends entirely on how the question is framed. For example, on any given day I might just as easily ask "Should I go for a run today?" vs "Should I skip my run today?" -- a YES clearly means something different in each case. And thus my faith in the "magic" was restored.

While I'm of course being facetious with regard to using a magic ball for anything serious, it's generally interesting to consider the framing of questions, and indeed goals. In the context of this blog, and the Habit Zap app, habits are frequently thought of as something gained, like building a flossing routine, or learning a new skill. But it's potentially useful to remember that you can use the same tools and techniques to remove habits you want to limit or break entirely. For example, using Sessions and Streaks, you can track how many days you did not eat candy, or whatever else you might be trying to reduce or eliminate from your life. It's all in how you frame it!
Note: As an Amazon Associate, we earn from qualifying purchases.